THE ONE HUNDRED YEARS: 1849 to 1949:
​SPRINGFIELD was settled in 1801 and the first preaching of which we have record was in 1803 in original pioneer Grifith Foos’ Tavern. Hardly a church, it was located just west of the Main and Spring intersection and served as the original Methodist meeting place in Springfield.

Methodists were soon on the scene, with Rev. John Thompson, of the old Mad River Circuit, preaching here. A Methodist church was organized by a group, headed by Mrs. Walter Smallwood, of Virginia. For several years, Methodists, as well as other religious groups, met in Nathaniel Pinkerd’s log school house, northeast corner of Main and Fountain streets. In 1811, the first building exclusively for religious purposes was built of hewed logs, on the west bank of Mill Run.
​
Buoyed by several visits of Bishop Asbury, in 1814 the Springfield Methodist Society began to think in terms of building a more permanent structure, one designed as a church. That same year they acquired from Maddox Fisher a lot at the northwest corner of North and Fountain. A proper church made of planed lumber, not logs, was then constructed. This was the first Methodist Episcopal Church in Springfield. They already had a preacher as the Rev. Saul Henkle, the first ordained Methodist preacher to actually locate in Springfield, had come with his family from Virginia. This was followed in 1833 by a larger brick church located one block farther south on the southeast corner and known as Columbia Street Methodist Church. By pre-arrangement, the Court House bell, a block away, was rung to call the congregation together. This became so crowded by 1849 that a change was necessary. On the first Sunday in April, the pastor, Rev. Charles Elliott, at the close of his sermon, asked those to stand who would be willing to join in founding a new church and 85 persons, including men, women and children responded. Thus was born the High Street Methodist Church. The next day, Rev. Elliott appointed the first Board of Trustees composed of Levi Rinehart, Edmund Ogden, Christopher Thompson, L. H. Olds, Rev. J. W. Young, S. G. Moler and S. S. Henkle. Both Sunday School and church services were held for some time in the High School building, which became the Female Seminary, and later became the Y.W.C.A. On January 1, 1850, a lot was purchased, the site now occupied by our present building. A brick structure was erected and dedicated July 27, 1851. Just ten days before dedication, a resolution was presented to the board by Judge Dial, “Resolved that hereafter those of our church who may be inclined to sit with their families are hereby authorized to occupy seats according to such method of choice as may be mutually agreed upon.” Formerly, they had sat and worshiped, the women on one side and the men on the other. The dissention engendered by this resolution almost disrupted the young church for some members were violently opposed. High Street is now recognized as the first Methodist church west of the Allegheny Mountains to initiate “family seating.” 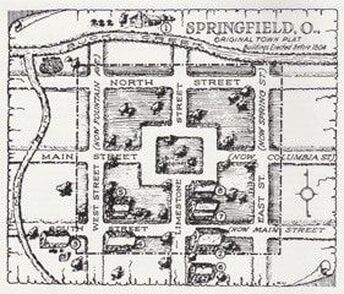 The years 1850—1851 witnessed a remarkable revival starting in the high school, and many became valued members of the church.
​
In 1868 an addition was put on in front of the existing church at a cost of $18,000, under the dynamic pastorate of Rev. Thomas Collette. Half of the money was raised before completion and the other half in forty minutes on dedication day, the first Sunday in 1870.

In November, 1873 a parsonage was bought, an old residence on the site of our current educational wing. This was used until 1891, when another parsonage, Later a parish house, was built.
​
In 1881, the church was renovated and repainted, according to Mr. Raynor’s report, an iron fence placed in front of the church property, three new furnaces and a new organ added, at a cost of $1950. In 1899, a semi-centennial was held and the existing debt was wiped out. 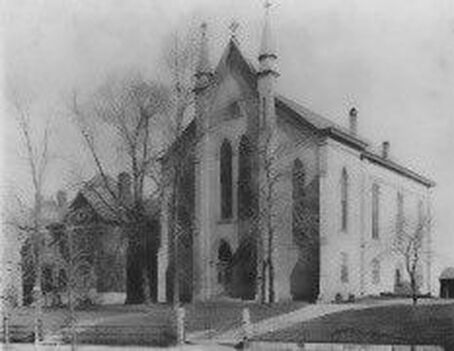 The structure is of stone with red tile roof, and was patterned after an English country church and the total cost was about $48,000. Old records tell us that Robert Johnson contributed $4707, having agreed to give one-tenth. The rose window in the south front of the church was given as a memorial to Christopher Thompson by his heirs: Mrs. Dorothy Johnson, Mrs. Emma Clark, Mrs. Mary Hayward and Mrs. Alice Rice. The five art windows in the foyer were given by Mrs. Dorothy Johnson. The central figure of Christ is surrounded by Matthew, Mark, Luke and John. Every evening these windows in the front of the church are lighted by the order of the official board, in perpetual memory of Harry Herr, who was killed in an airplane accident during World War I.The rose window in the west end of the Sunday School room has in the center the Christ by Hoffman and was given in memory of Mrs. J. W. Gunn by Rev. Gunn and Mr. Bradley.
​
The dedication services extended from June 28th to July 5th, 1904. Rev. John H. Story, the pastor, was assisted by Bishop James W. Bashford of China, and Bishop David M. Moore of Portland, Oregon. 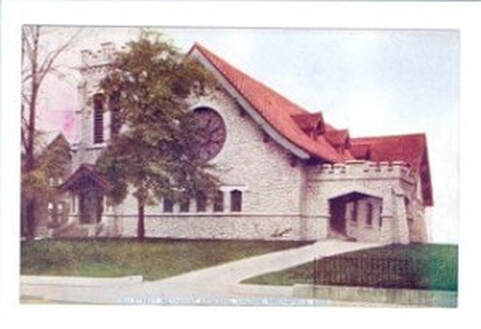 In 1939, the coal furnaces which heated the building were removed and steam heat was installed with money received from the Alice Hosterman estate.In 1941, it was determined as a memorial to install a new three manual electric organ with chimes and a divided chancel and an altar.

Handsome lighting fixtures for the Sanctuary were given by Clarence Foster, together with other generous contributions. Bronze plates bearing the names of 79 memorials and 157 donors were dedicated at the Centennial celebration.
​
Two imposing seven-branch candelabra have been placed on either side of the altar, the gift of Mrs. Herr, in memory of Mr. David Herr.Recently, Miss Eleanor Stimmel has had the organ equipped with a harp attachment, in memory of her sister, Mrs. Carey R. Merriman. New quarters were made in 1941, for the Boy Scout Troop, in the basement, utilizing the old furnace room and adding three rooms by excavating under the church proper.In 1945—1946, various improvements have been made, including relaying the tile roof and work in the rear of the church, costing $9000, $4000 coming from the estate of Mrs. Elba Baker. This was undertaken during the pastorates of Dr. Plummer and Dr. Richards.In the fall of 1948, the trustees and the official Board decided on a program in anticipation of the Centennial Celebration in April, 1949.
​A new parsonage in Audubon Park addition was purchased. The old parsonage adjacent to the church was converted into a parish house, containing church offices, pastor’s conference room, kitchen and large assembly room or lounge on the first floor. The second floor remodeled for living quarters, which are at present occupied by our youth worker and church secretary.

The stone walls of the church were re-pointed, the exterior woodwork painted after all faulty lumber was replaced and the entire property landscaped. The kitchen and dining rooms were en­larged, refurnished, redecorated and new asphalt tile floor laid. The Sunday School room was redecorated and folding doors installed under the balcony affording space for a small chapel. A new lighting system was placed in the kitchen and dining room, also in the Sunday School Room.

Dr. Ross Wilhide added this to the conclusion of the history of High Street United Methodist Church which he composed for the Centennial celebration.

“High Street Church reviews with pride the century past and looks with strong faith and courage for a glorious future of service and enlarged opportunity.  One hundred years of service in the history of our church represents more than anyone could ever pack into mere human language. It stands for heroic faith and sacrifice, for laughter and tears, for love and devotion, for success and disappointments, for high and holy moments and for periods when God seemed so still. These and countless other things do these years signify. It seems that one might most nearly summarize it by saying that for the most part, it repre­sents the efforts of a company of men and women most of whom have made a valiant effort to “walk with God”.It is a thrilling thing to be privileged to share in this high moment of celebration and be inspired by the history of the achievements of these men and women of yesteryear. Allowing for all the mis­takes and human frailties, I am quite sure they who have “gone before” and those of us who follow after could, as we review it all, join with Paul in saying, “We have fought a good fight. We have kept the faith.”But every mile post in life’s journey offers not only the satisfaction of accomplishment—it also presents the thrilling challenge of the unattained, of the “more beyond”. So, we dare not rest in our satisfaction, but we must “reach forth to that which lies before.” We must dare to venture with God to build on the foundation which has been laid by those who have so nobly wrought, for only thus will we show our worthiness of the rich heritage which we celebrate today.” 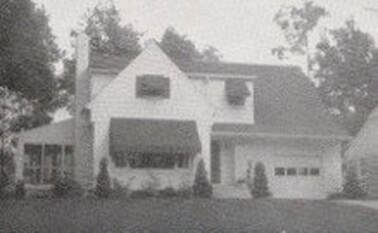 THE NEXT YEARS: 1950 to present:
Records show that the membership of the church stayed fairly consistent for the next decade, averaging around 700. In 1958 a preliminary exploration of building needs was made to provide more modern and adequate space for the Sunday School classes. After several different plans were submitted and rejected, due to cost, it was decided to build an addition to the west. The former parsonage, then Parish House, was torn down, as well as a property that was purchased to the west, in order to make room for the new structure. The plans were approved and work began in 1966. The building was completed and consecrated for use on September 10, 1967. The new wing closely resembles the exterior of the original building except for the tile roof, the cost which was found to be prohibitive. The new structure has 6,900 square feet of floor space on two levels and includes the church offices and pastor’s study.  The total cost of the addition was $185,000. By the end of 1970 the debt was retired and a formal dedication of the new wing was held on January 24, 1971.

In April of 1973 a new parking lot, and adjoining property holdings at the rear, facing Spring Street was purchased for $50,000. This doubled the available number of parking spaces.

Plans were made to renovate the church parlor and a Consecration of the Renovation of the Church Parlor was held on June 1, 1986. A formal dedication was held on September 17, 1989. In July of 1989 the church purchased the “YWCA” property to the east which had fallen into disrepair and been abandoned. The building was deemed unfit to repair and was demolished. A new parking lot was constructed in its place.

In 1998 a capital budget improvement was completed for central air conditioning of the church sanctuary and the education wing.

Early in the new century plans were made to renovate the sanctuary. The communion rail was moved forward, the choir loft enlarged, new choir chairs were purchased, and the organ relocated. A new sound system was installed in the sanctuary. Later, as part of the Acts 29 Implementation Plan, the Parlor was also renovated and renamed the Commons. The men’s and women’s rest rooms were enlarged and renovated.The parking lot was repaired and landscaped. A new fenced in playground area for the children was added in one corner of the rear parking lot. 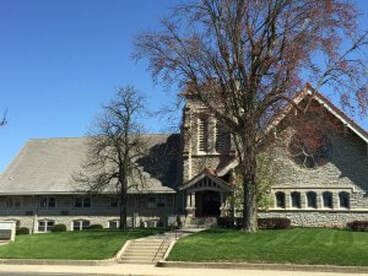